Start a Wiki
Near Orbit Vanguard Alliance 3 (aka N.O.V.A. 3) is Gameloft's third installment of the critically acclaimed N.O.V.A. series for iOS and Android devices, with a planned release for the BlackBerry Playbook coming soon. The game was released on the App Store on May 10, 2012. N.O.V.A. 3 falls into the sci-fi action-adventure FPS genre. As with many of the action-adventure titles released by Gameloft, N.O.V.A 3 features Gameloft's multiplayer service Gameloft Live. Even though its predecessors were rather similar to Microsoft's Halo series, this game seemed to be more original, with Kal Wardin's appearance now akin to the nanosuit of the Crysis series.

N.O.V.A. commander and protaganist Kal Wardin receives a distress call from his AI, Yelena, on the long abandoned planet Earth. He crash lands in the city of San Francisco and joins up with Echo One to re-activate communications and fight their way to the N.O.V.A. base. There, he finds out that the N.O.V.A. has stolen a Judger artifact, in the hopes that it could transform Earth back to the habitable planet it was. Kal is approached by Prometheus, who scolds the humans and the Volterites for being child-like. He tells Kal that the Volterites had discovered the location of more artifacts and were attempting to seize them as weapons of mass destruction. Prometheus sends Kal to a Judger Ship named Therrius, where Kal meets a rebel Psycher named Maz' Rah. Kal helped Maz-rah take over Therrius. Once Kal retrieves the artifact, Prometheus immediately transports him to the location of the third artifact, the planet Boreas. Kal fights Volterites on the planet, and also many heavily armed ragheads. Kal meets up with his old friend Rufus who aids him for the rest of the journey. When Kal and Rufus finally arrive at the location, Prometheus school teaches him to recover the artifact which is now in Volterite hands. Once there, Rufus and Kal split up. After Kal found the artifact, him and Rufus found Maz'Rah and Yelena were initiating a self destruct system on the planet. The Kar'rak, controlled by Maz-Rah, kills Yelena. Kal and the monster fight, before Maz-rah turns on the Overseer, resulting in both of their deaths. The planet falls apart, as Kal and Rufus are teleported to safety by Prometheus.

Many Multiplayer extensions/updates are in NOVA 3:

•Free-for-All: Kill or be killed. Whoever hits the kill limit first wins and ends the game. Whoever has the most kills if time runs out wins.

•Team Deathmatch: Two teams (red and blue) battle each other. Whichever team hits the kill limit first or has the most kills wins and ends the game.

•Freeze Tag: Team-based mode where enough damage that would normally kill instead freezes them. Freeze all enemy team members to score a team point. Stand by frozen teammates for 3 seconds to thaw them.

•Capture the Flag: Each team has a base holding a flag. To score a team point you must take the opposing team's flag and return it to your base. Before scoring, your team's flag must be secured in your own base.

•InstaGib: A Free-for-All mode where you and your enemies have a Railgun any hit is a kill shot. (Since the beams do continous DMG very fast to kill, a lucky player sometimes manages to run out of the beam and survive.)

•Capture the Point: Capture and then hold control of all points for 20 seconds to score a team point. Stand by a point to capture it. 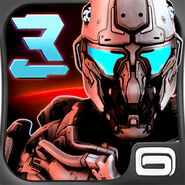 Old app icon
Add a photo to this gallery
Retrieved from "https://nova.fandom.com/wiki/N.O.V.A._3_-Near_Orbit_Vanguard_Alliance-?oldid=10213"
Community content is available under CC-BY-SA unless otherwise noted.